Women in Art and Comics 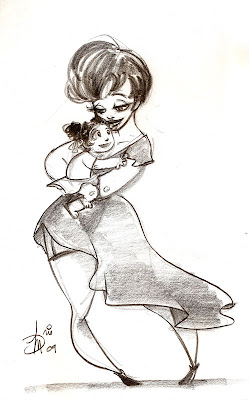 Shanequa Gay over at creative wisdom Posted this article called "Who does she think she is." It was actually really interesting video attached to it, as well. I guess there is a movie being done about women working in the arts.

It addresses how women, especially women that have children, tend to get over looked in the art world. I know there are few women I can think of off the top of my head, from the US, that work in comics; but this is a male dominated industry. So the question I pose is; How hard is it really to be a women in this industry?

I think in the arts, there are few females that take comics seriously as a career. When I was at JKS, in my class, out of 300 guys there might have been 15 chicks. And there was only one female teacher that was a comic artist, the wonderful June Brigman.

When I go to conventions, I see mostly guys sitting at the tables and the few women that are there, though amazingly gifted, I don't think many people know who they are. I think though that Manga has been a blessing for women in this industry. Because there are stories geared toward female readers I see there are more women drawing and enjoying manga and anime. I see tons of tables with girls at Anime conventions.

The female audience in comics is an audience that has been to long silent. There is a huge potential market out there because we love reading stories and drawing and creating just as much as the next guy. I know for myself, I love a good corny love story and sometimes spiderman just doesn't do it for me.

I find also, that sometimes when someone wants me to do a comic story for them I just don't find myself having passion behind it. Not because the story isn't good but maybe just because I don't relate to it. I like to draw women in all shapes and sizes though! I think that is great fun! We can be so unique! But sometimes when I am doing to many comic pinups it can get a little repetitive. I remember there was a drawing I did of Rogue laying down. I think I had about 5 commissions where people wanted me to draw a character for them in that pose or something very similar.

Anyway, I would love to hear others opinions on women in comics. Feel free to give your own opinion. and don't forget to check out Shanequa Gay's blog. She has some beautiful work.