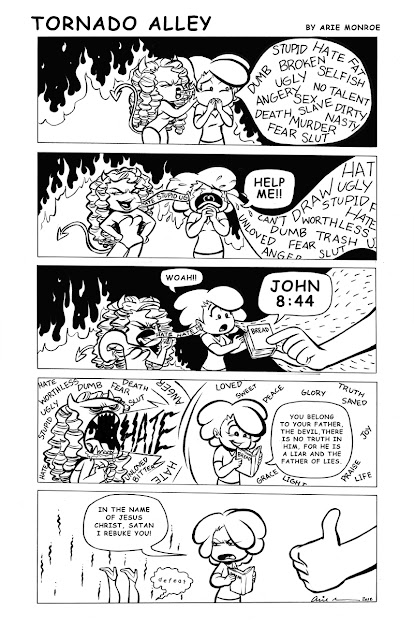 Are you being lied too?

I really enjoyed this sermon. One thing I have been thinking about lately is how do you tell the difference between when you are being attacked by Satan and being loved by God.

I friend told me the way you can tell the difference is by how you feel. God does not give a spirit of fear or worry, nor does he encourage bad habits or bring stress.

Satan works on us bringing us worry fear nervousness, and many other negative emotions and we pray and pray and hope things will get better. Many times when Bad things happen in our life the first thing people do is say GOD why have you dont this to me. But we forget. God has not done any of these things but it is satan and sin that is working against us.

The entire world is perverted by sin and when horrible people do horrible things to innocent people people automatically think something bad no one ever stops and wonders if they are under attack.
Look at how much Christ suffered as a Man. He knew he would die. God did not kill His Son. People and Satan worked crucify Christ. Yes God knew He could reach down and save him but at the same time God also knew he could save us all and that for Christ there was no death but only life. But unfortunately that life came at the price of suffering.
There is a interesting scene where Christ is talking to his deciples in the bible and He rebuke Peter after Peter tels him that he should not die. I think the importance of this seen is shown well in that it is brought to our attention more then once in the bible.

31 And He began to teach them that the Son of Man must suffer many things, and be rejected by the elders and chief priests and scribes, and be killed, and after three days rise again. 32 He spoke this word openly. Then Peter took Him aside and began to rebuke Him. 33 But when He had turned around and looked at His disciples, He rebuked Peter, saying, “Get behind Me, Satan! For you are not mindful of the things of God, but the things of men.”

21 From that time on Jesus began to explain to his disciples that he must go to Jerusalem and suffer many things at the hands of the elders, the chief priests and the teachers of the law, and that he must be killed and on the third day be raised to life.
22 Peter took him aside and began to rebuke him. “Never, Lord!” he said. “This shall never happen to you!”
23 Jesus turned and said to Peter, “Get behind me, Satan! You are a stumbling block to me; you do not have in mind the concerns of God, but merely human concerns.”
24 Then Jesus said to his disciples, “Whoever wants to be my disciple must deny themselves and take up their cross and follow me. 25 For whoever wants to save their life[f] will lose it, but whoever loses their life for me will find it. 26 What good will it be for someone to gain the whole world, yet forfeit their soul? Or what can anyone give in exchange for their soul? 27 For the Son of Man is going to come in his Father’s glory with his angels, and then he will reward each person according to what they have done.
28 “Truly I tell you, some who are standing here will not taste death before they see the Son of Man coming in his kingdom.”

I think that this speaks volumes in that here we see people that are considered men of God and disciples of Christ being influenced by Satan. It is like Satan manipulates us like his little toys.
Have you ever questioned your thought? You ever have a thought or strong emotion that seemed out of character to you and questioned whether it is really coming from your.

I have tried this experiment before. Around the time when I first got saved. I was having some really dark and frustrating thought and for some reason I was lead to rebuke Satan right in the middle of feeling really Down and oppressed. I spoke outloud, in the Name od jesus satan I rebuke you."
It was a very strange expereince. I had immediate relief!I had been feeling depressed for days and suddenly my head felt completely clear. To this day I am not even sure what lead me to do this but I did and I felt instantly better and my mind felt light.

I am curious if anyone else has ever felt this. Trust mem though Satan is relentless!! There are times when I feel like I am under constant attack. Like my thoughts are so heavy I cant even speak. it is overwhelming. That however was the day I learned to question the things going into my head.

12 For we do not wrestle against flesh and blood, but against principalities, against powers, against the rulers of the darkness of this age,[a] against spiritual hosts of wickedness in the heavenly places. "

I have come to the conclusion that Satan will do everything he possibly can to hurt us or turn us against God. I mean seriously imagine the most evil peron you can think of or that you may even know and then think of how Satan is influencing that persons life and leading them astray and how he does it to every single one of us if he can.

Look at what is on T.V and how every t.v show and often even cartoons try to steer people away from knowing an loving God. When you can see that in our society. Then you can know for sure that sometimes we need to question exactly what is going through our own heads. I remeber when a friend showed me this a while back. one person in particular in this test refered to the game as a mind altering demonic weapon.


Not that I am trying to be a prude or anything cause I grew up loving horror films. But games are on another level to me cause they place the individual in a situation that can tie them emotionally to what is happening on the screen.  God tells us to be careful not to be decieved. Satan attacks the mind in many ways. Not just through media but even through personal experience.