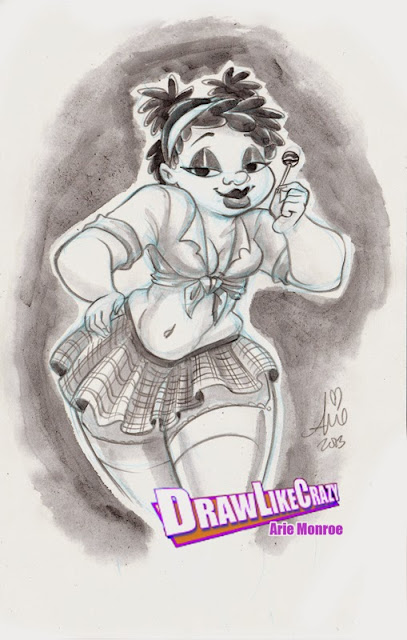 So I am working on a Calendar. I think i might have mentioned this before. I decided to do a pin up calendar but I wanted to have it feature a fun plus size character and have it be different from what I usually see in pin ups. I just hope it accomplishes that.

I have laid out a lot of pages, but I am going to put project on hold for a little while while I work completing the first  story of Big Booty Jane, Galactic Space Cop.

I always liked sci fi and I wanted to do something that would also make me laugh and in a way make fun if sci fi so I put together this story!

I stopped doing nudity for a long time in my work. But I realize its not that I don't like drawing that sort of thing, I just don't really like drawing it for other peoples requests and commissions. I would rather do fun playful stuff that I find appealing and personally enjoyable. If other  people enjoy it as well then cool.  If not then they don't have to look at it.

I guess it all comes down to self expression.

I already get the occasional on looker that thinks something is wrong with my drawing pin ups. I don't know how many times I have heard other say I draw women as if I am a man.  I had a older women at a comic convention scold me for drawing pin ups and then buy one of the drawings I did of storm lol!

At the end of it you cant make everyone happy. So you draw what makes you happy instead. Be yourself and be creative!