Why I didn't like the Princess and The Frog. 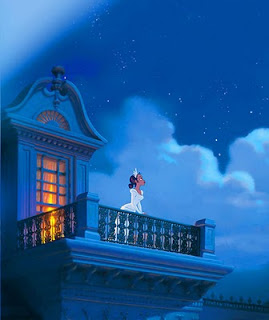 I decided to write up a nice little LONG blog about the Princess and the Frog. I am breaking it up into a few pieces because it's a pretty good length. The reason I decided to do this is because I feel many people out there will be willing to say they like it without really analyzing the story. Many people will just write this off as another kids’ movie without looking at some of the underlying reasons why they might choose not to let there kids see this film. I feel like sometimes in our society we get conditioned to just accept what is being put out there as good even if honestly it has a lot of things wrong with it.

Do not read this if you care about spoilers.
I wanted to see this movie just because of the hype around this film and the idea it is the first Black Princess. After watching it, I didn't feel like this was a film that even the people creating it really believed in or cared about. One reason for that is I felt like i was being rushed through the film. I felt it jumped quickly from one sequence of events to the next. On top of that, I felt there were a lot of stereotypes running through the movie that really were not necessary to the progression of the film. I don't care if the creators thought it was funny, I honestly didn't.

I am breaking my review up into parts. I will start with the basic plot and a summer of the movie. 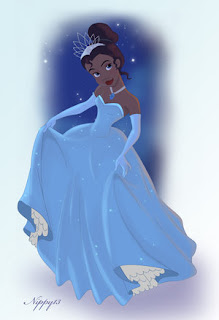 Summary:
Ok so Tiana is a young black girl who's mom is a seamstress and the film opens with Tiana and her mom at the home of a rich white family making a dress for the Charlotte a young debutant that wants to be a princess. the mom is reading the story of the frog princess to them.

When Tiana and her mom return home her dad is there and they are sharing gumbo with the neighbors and preparing her for bed. As the scene ends they are looking out the window wishing on a star and the Tiana sees a frog and screams and runs out the room. when she comes back in she is now a grown women and she is coming in from work only to get ready to leave and get ready to go back to work.

Tiana is trying to save money to someday realize her fathers’ dream of opening a restaurant. On the same day Prince Naveen arrives in town and Charlotte and her dad come into the restaurant where Tiana works and announce it. They give Tiana money to cook stuff for the party they are having, which Naveen is invited to, and Tiana is now able to use it as a down payment on the building she wants to have her restaurant in. But, she is told by the owners that if she doesn't have the entire amount of money in full they will sell it to someone else.

That night an evil witch doctor called The Shadow Man takes Naveen and his companion to his show to read there fortune where the prince gets attacked.

Back at the party Tiana is very sad and after falling and ruining her dress her friend Charlotte takes her to her room and puts her in one of her princess outfits to where at the party instead. Then Charlotte leaves the room because a fake version of Naveen has finally arrived Tiana walks out on the balcony where the real Naveen, now a frog, is sitting there. He tells her she needs to kiss him to turn him human and Tiana turns into a frog instead.

They leave the house and end up in the bayou where they meet a alligator that wants to be a musician. The alligator tells them about a voodoo woman, Mama Odie, that can turn them back human and they set off to see her. On the way they run into a fire fly that tells them they are going the wrong way and he gets all his fire fly buddies to lead them in the right direction.

On the way they run into some nasty hill billy type hunters that are looking for frogs so they can have frog legs for dinner. the fire fly helps save then. As they travel over night the prince starts to fall for Tiana cause he likes her personality. when they reach Mama Odie, she sings a song about how they need to look inside themselves to get what they need and she basically through this song gives this hint that if he wants to be human him and Tiana should get together but they don't really get all the double talk and so she tells them that he needs to kiss Charlotte before 12 am that night while she is the princess of the Mardi Gra and then both of them will turn back to being human.

in the mean time Charlotte is under the belief that Naveen’s companion that has been convinced to marry Charlotte. He is wearing a voodoo charm that make him look like Naveen with Naveen’s blood in it but if they blood dries up he turns back into himself. They plan to have the wedding at Mardi Gra that night and him and the shadow man make a plot to get frog Naveen back so they can refill the voodoo charm with his blood.

Back in the bayou the gator, fire fly and the 2 frogs board a river boat that will get them quickly back to the city. Naveen decides to make a ring and propose to Tiana but he gets to nervous. Naveen is then swept away by evil spirits to take him back to the voodoo guy. Tiana and everyone gets off the boat and heads to Mardi Gra where they see the fake Naveen about to marry Charlotte and Tiana runs away. The fire fly consoles her and then flies up to the float where he finds the prince in a box. He unlocks the box and the frog prince grabs the fake Naveen and they fall off the float. The fire fly steels the voodoo charm and takes it to Tiana.

Tiana runs away with it and gets chased by the shadow man and the fire fly tries to stop him and gets stepped on. The gator later finds the firefly. the Shadow man trying to cut a deal with Tiana and she refuses and then Tiana brakes the voodoo charm.

The evil spirits then attack the shadow man and they kill him. Charlotte shows up looking for Naveen when he see the frog prince and he tells her they need to kiss before midnight because that is the only way to turn them human. There is only 5 minutes left before midnight and Tiana tells the frog that she is in love with him and that she can't live without him and charlotte agrees to kiss the frog without marrying him but then the bell rings and it is too late.

The gator shows up and tells them the fire fly was hurt and the fire fly tells them he wants them to be together before dying. They have a funeral for the fire fly and then they look up in the sky to see she is a bright shining star and now he is with the love of his life, another star.

Tiana and the princess are married by the Mama Odie and when they kiss they both turn human because the reason that Tiana turned to a frog in the first place was that she was not a princess but now that they are married she has become a princess.

They take Tiana’s money and rush to buy her building and the building is remodeled and they turn it into a night club restaurant and every one lives happily ever after. 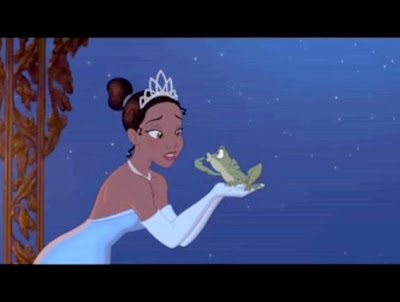