Princess Frog: part 4: The Film As A Whole:

I thought the movie 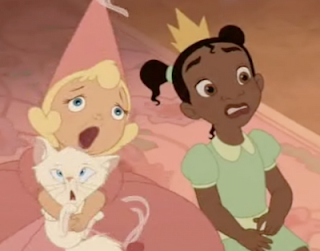 was mediocre. I feel with the Disney track record, the film could have been so much better than it was.

I felt like if the film was better written and if they had taken more time with the story like they do with their other films, that Tiana had the potential to shine. One of my hang ups was the film was set in New orleans during the 20's which was a time when racism was a very real thing and I feel like to avoid the race card being a factor they fell back on Tiana being a frog for most of the film and then having her hang with her animal friends as a short cut to get around burning any bridges. Lets face it, if Disney had done a movie with all black characters they would have isolated their audience cause all the characters would have been African American.

So they had to do something to keep the movie fun and non confrontational. I mean heck just watching the film they never even really mention what race Naveen actually is. There is no back story what so ever on who he is and where he comes from. He just kinda shows up one day.

I felt the film could have been just as good if it were set in modern times because then the creatures would not have had to tip toe around historical and racial boundaries. Heck I think it could have been very creative if it was even set in the future.

Picture this, I average Af am family living in a futuristic world where the girl has a love for old southern culture and wants to have a restaurant ran in the old fashion traditions passed down through her family. I prince from another galaxy arrives in town looking to marry the presidents daughter ( and best friend to Tiana) and but his technologically advanced companion has other ideas so once he arrives he turns the prince into a frog and disguises himself as the prince. Tiana finds the frog and is forced to help him get his identity back. Tell me that doesn't have the potential for some good ole sci fi action and some interestingly colorful characters.

Anyway, I am going on and on, but I think there were other options for creating the black Disney princess that could have been more fun and way more creative then what was released while relieving fear from critics about the film being racially offensive and what have you. Plus they couldn't have gone wrong with a Sci - Fi flick lol.

In the end I felt like Disney resorted to pulling ideas from a bunch of their old films and mashing them all together to make a movie. I didn't feel like the film had anything about it that had not already been done in the past aside from the use of African American characters. I felt that the theme of working hard to get what you want in life was a little unrealistic for this day and time where american values often back fire on people no matter how hard they work. For example all the people that are out of work that have been on there jobs 25 years or more, but got a bad deal cause of the economy.

I also feel that though they made an effort they still resorted to the use of stereotypes to define the characters personalities in the film. Like the single mom raising the family, the smooth talking player turned marriageable man. Not to mention. Who gets married at 19 anymore? There were just a lot of things wrong with the movie that honestly made it lame to me. I men the story literally takes place over night! The film just felt rushed and not well thought out in terms of story. I am sure it will make plenty of money, but it was a downer in terms of Disney's triumphant return to 2D Animation. I can understand taking creative liberties but the movie was just to shallow and unrealistic to me. It was like they just needed a reason to sell some toys so they threw something together really quick.

That being said don't let my feelings ruin a movie for you. This is just one chicks opinion.