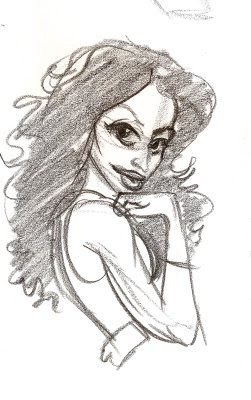 Is this the reality for Black people in America. Yesterday and the day before there was a series that came out called Black in America 2. It was airing on CNN. They had a few people on the show talking about how black people get stereotyped as being this poor and victimized race of people even though it really is just only one side of the story. There are people of all sort of back grounds that live in the Af Am community in the US.

More importantly I think that it is time people of all races recognize how alike everyone really is. Class and money are just a matter of fact in American society but my question to you is who's fault is it really. People have been working there butts off to over come these issues all over the US no matter what culture they come from. I think it is time we stop looking at all the bad things in our society and stop scaring each other out of taking a chance to be great in life.

One of the people they had on the series was Tyler Perry. I found his story exceptional and a breath of fresh air. He gets to go down in history as the first Black man to own his own film studio. Now personally I think his characters can be over the top sometimes but he still brings something to the plate and that is the Black story. It presents something to really relate to in this society where people let television raise there kids. Something other than booty shaking and hip hop. Something that happens to be real on one level or another.

Do you know that he sold 100 episodes of the tv series "House of Payne" for $200 MILLION DOLLARS! So here is a yet another question. What got him there? He said the first time he did a play only 30 people showed up and the show flopped. But he did it again and he got a popular gospel singer to do a song and it was a hit.

He said the first time he tried to pitch "Dairy of a Mad Black Women" that producers told him black people didn't go to church. So he packaged the play and sold DVD's and suddenly people are calling him begging the him to make the movie. The movie sold out opening night a grossed like 3 million dollars.

I am sure everyone heard the story of how he use to be homeless and how he grew up in a broken home but the story he mentioned that inspired him was how his dad worked as a carpenter when he was little and he fixed up this mans house for $800 dollars and the man sold if for $30,000. He said he decided he wanted to be the man that owned the house after that. You can't blame him though. There are so many amazingly talented people in this world. Even people that don't believe they can do great things will find that the second they start believing they are able to be more than what they are, their whole life will change for the better. Not say there won't be hard times cause there will always be hard time, but they will look forward to a time of peace in there heart because they went after and got what they wanted.

"You and all you are concerned with are moving toward completeness. Nothing can check this forward movement but yourself; and you can only check it by assuming a mental attitude that is at cross-purposes with the mind of God. You have nothing to keep right but yourself: if you keep yourself right, nothing can possibly go wrong with you, and you can have nothing to fear. No business or other disaster can come upon you if your personal attitude is right, for you are a part of that which is increasing and advancing and you must increase and advance with it." Wallace D. Wattles "Science of Being Great."

In other word, if you set your mind in a positive way and believe you can get what you want you can be assured you will get exactly what you want in life. It goes both ways though. If you think you are a failure and a victim and that you will always be poor then that is exactly what you get because you don't stand up and demand more from yourself. Stop watching t.v and go to the gym, or write a book or heck read one. You will be surprised what you will find out. Study people that are doing great things and try to do what they are doing for yourself and you might just find that your whole life changes and you become great. Did you know people waste hundred of hours of there lives just watching T.V. Imagine what you can do with that time.

When I went away to school we didn't have working t.v stations so me and my roommates found other ways to occupy ourselves. I think I learned more in all that time just reading and listening and studying things I enjoyed then ever in my life. and guess what? It was fun!

Perry said in his interview that one day he started keeping journal and that journal supplied him with the stories he needed to write enjoyable plays It is amazing what can happen when you burst out of your shell and share yourself with the world.

On that not here is a video. I don't agree with the language but I remember when this came out on BET it was surrounded with controversy. It was crazy! you judge for yourself and don't forget to go out and be great today! See ya tomorrow.